The Norelem company, manufacturer and industrial supplier of components is located in France and Germany and has two production sites, one factory is located in Fontaine les Grès in the French department of Aube.

Norelem was created in 1943 in France. If its first expertise was manufacturing tools, the company progressed with the standardization begun by the automobile industry at the end of the 50’s and geared itself toward the design and production of standard parts. It was during this period that Norelem’s business took off and its area of influence grew to extend across Europe. Today, Norelem products are sold throughout the world via a distribution network that exists in five continents.

The Norelem reputation was created on the quality and reliability of its products (it manufactures 70% of the marketed equipment) and on an ongoing effort to improve service to their customers. The latter come from all industries: general mechanical, automobile and aeronautics, medical, etc.

From the « mimic board » to the first CAD library

In the beginning of the 60’s the automobile industry already required displays of components that it used in the design of its vehicles or its manufacturing processes. Norelem then supplied what was usually called“mimic boards”. These were drawings of parts, on a first scale, made in the form of boards. This goes to show that the manufacturer was very quickly sensitized to the needs of industrials for graphic displays of components that were not created within the factory.

In 1987, relying on assistance proposed to businesses in order to make it advantageous to use innovative technologies (at the time it was the CD-ROM), Norelem proposed its first library of components in 2D. Using functionalities of Medusa, parametric 2D design software, their teams developed a configurator themselves which made it possible to obtain drawings in the IGES 2D standard format.

In the beginning of the 90’s, Norelem understood that the penetration of CAD 3D software was about to change the situation with their clients. Its own research facility had, by the way, adopted a tridimensional modeling software. The company, which participated in a reflective effort led by the large industrial groups on the standardization of libraries in 3D, attempted to prolong its “CD-ROM” experience in the third dimension. But the technical challenges were too large and that included multiplicity and instability of the CAD native formats.

Damien Cardon-Dubois is the Technical Director for Norelem France. He justifies taking the step of externalizing developments which were adopted at the time:

“ An internal development would have caused us to make compromises, specifically on the proposed CAD formats. This orientation would have penalized some users of our components and would have been contrary to our tradition of offering the best service to our clients. This work went largely beyond the framework of our profession.”

Norelem searched for a partner who had high quality requirements and results inspired by its own experience on the subject. They chose TraceParts whose expertise in terms of 3D parameters was recognized and whose reputation was growing with large industrial groups.

Today, close to half of the 25,000 items in the Norelem catalog are available online in a dedicated space, accessible from the manufacturer’s website (www.norelem.com) and from the TraceParts website (www.traceparts.com). The library is regularly updated with new components. 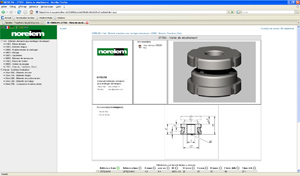 The effort made by the company has not been limited to the creation of the 2D CD-ROM, since Norelem composed and operated a database which included the geometric features and techniques of all of its equipment. This unique reference is used to generate all media: paper catalog, CD-ROMs and online library. The parameter files are sent to TraceParts which ensures that the component families will be generated in 3D.

The CD-ROM media (this time with 3D components) is still requested, but mainly by the National Education organization. Norelem actually proposes a lot of educational media intended for technical coursework, among which a didactic aid in the design of machining assembly set-ups.

The international character of the group, especially its installation in France and in Germany, caused Norelem to retain two suppliers in order to respond to the expectations of the various markets. Damien Cardon-Dubois justifies the choice of TraceParts:

“ We could not ignore their level of importance with our major customers, especially in the aeronautics sector. More generally, their reputation in numerous European countries made them an indispensable partner. By the way, we are currently working on harmonization and the online TraceParts catalog is being translated on the German Norelem site.”

But these multiple experiences within the Group also gave Damien Cardon-Dubois the opportunity to point out the qualities and performance of TraceParts: “The quality of the models – let us even say the price/quality ratio – is without a doubt the strongest part of their offer, and our past experience allows us to appreciate even more the work they have done. Their team is highly professional who know their field well and they respect our requirements while remaining responsive to our feedback. Finally, their product is appreciated by our customers.”

The number of connections on the Norelem download area is very large, especially since 2005 when access to high speed Internet connections became common in businesses. Even though these accesses are linked to the reputation of Norelem equipment, Damien Cardon-Dubois voluntarily recognizes that most of them originated on the TraceParts site:“It’s also the economic component of this partnership”, concludes Damien Cardon-Dubois.

“Our components are particularly visible on the search engines thanks to efforts by marketing and TraceParts referencing and to frequent visits on their site. By not limiting the service provided to only technical aspects, TraceParts favors communication with its customers. We measure the importance of this effort and we appreciate the benefits daily. It therefore comes naturally to us to commercially exploit the download requests and that, no doubt, is part of our job!”

﻿
Publishing 3D Catalogs
Component manufacturers and distributors get qualified leads and increase sales with TraceParts. It's easy and cost effective!
Ask for a demo
A world of possibilities for your 3D CAD models
Discover our 3D product marketing solutions and use your product data to generate sales.Download TraceParts 3D Product Marketing Guide
TraceParts Smart-Publishing
Create and publish your catalog by yourself. Ask for your access
The perfect audience for your products
Download detailed statistical reports about TraceParts users and find out who downloads what by product line, country, industry, and much more. Learn more about designers who download 3D products
Interactions between Designers and Component Suppliers
This “e-Book” provides exclusive statistics about how design professionals approach their work and projects, including their expectations and working habits.
Download the e-Book
Stay connected