“TraceParts gives us greater control over our production facilities”

Employing 19,000 people around the world, SEB Group holds a 10% share of the global market for small electrical appliances, worth an estimated 26 billion euros (laundry, personal care, preparation of food & drink, electrical cooking appliances, cleaning and home comforts), and nearly 15% of the global cookware market (skillets, saucepans, stockpots, pressure cookers, and so on) valued at 6.5 billion euros.

The group’s roots can be traced back to 1857 in the village of Selongey near Dijon, France, with the creation of the Antoine Lescure tinplate factory. The Lescure factory was passed down through the generations before becoming SEB (Société d’Emboutissage de Bourgogne – Burgundy Metal Stamping Company) in 1944. Metal transforming continues to represent one of the group’s core businesses.

Such success stories as the “super pressure cooker” in the 1950s helped fast-track SEB Group’s internal and external growth. The group currently comprises 20 brands, six of which are marketed worldwide: Tefal (the company joined SEB in 1968), Rowenta, Moulinex, Krups, All-Clad and Lagostina. Other brands are specific to local markets, such as SEB and Calor for France and Belgium. SEB Group sells 80% of its products outside France in over 120 countries. The group sells six products around the world every second!

The Tefal site in Rumilly employs over 2,000 people and also happens to be one of SEB’s centers of excellence for cookware. The other centers are located in Brazil, China and Selongey, the birthplace of the founding company. The center at Selongey specializes in pressure cookers and deep bowls.

The Machinery Department at the Rumilly site features a seven-strong team dedicated to designing the production infrastructure. Stéphane Charvin, project manager in the department, presents the missions facing the team:

“Our department’s activities span the entire machinery lifecycle, from pre-engineering to commissioning at the production sites, as well as coordinating the various business lines. Some equipment designs are partially or fully outsourced. In addition to our department, an Equipment engineering department designs the press machinery.” Tefal controls the metal transformation process, while plastic injection molding and steel / iron casting are outsourced to external providers.

The new requirements of 3D

Tefal gradually migrated from computer-aided drafting to 3D CAD in 2000. The last 2D workstations disappeared in 2003 to make way for Pro/ENGINEER. 50 licenses are now available in the R&D, Equipment and Machinery Departments.

“Two problems cropped up when we were changing over to 3D: some errors, even during the basic modeling of purchased components, and considerable time spent modeling from paper catalogs,” explains Stéphane Charvin. “In addition to these two obstacles, which caused assembly problems and lowered our productivity, it was difficult to standardize the parts used in our machines. We started using the different CAD libraries available from manufacturers, but we quickly realized that this first step would not always give us instantly ready-to-use Pro/ENGINEER templates and that we would lose far too much time searching for components. When we tried TraceParts, users were quickly won over by the application and its rich content. We installed floating licenses to cover our needs.”

The team designs new production facilities and also transforms and fine-tunes existing machines for manufacturing new products. Stéphane Charvin stresses the need to reduce and control the number of different parts used in the studies:

“The more we use standardized products for the different machines, the faster and easier it is to troubleshoot machinery or configure them for new products. The TraceParts library is very rich and the easy search feature could lead to an explosion in the number of references used. In TraceParts, we have found a solution to reach our standardization objectives.” 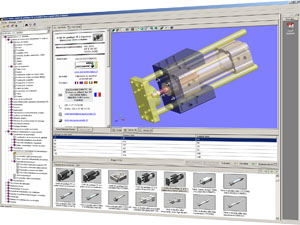 An internal library has therefore been created and is populated with elements selected and generated in the TraceParts application, where the priority is pre-saved components. The department’s team can also model a special part and add it to the library by applying a comparable classification to the one used in TraceParts. In addition to greater standardization, lists are also more consistent.

“Good synchronization was required between the parameters of the models designed with Pro/ENGINEER and those designed with TraceParts,” explains Stéphane Charvin, before concluding:”we received a helping hand from TraceParts and we are more than pleased with the result. This actually applies to all the tasks that we have assigned to them, such as installing new revisions or bringing into compliance with later versions of Pro/ENGINEER. This type of support may seem classic, but it is delivered in strict accordance with our IT security requirements, such as our firewalls. Given the highly competitive market, the entire SEB Group is very particular about protecting its intellectual property rights.”